The Odd Little Cabin in the Heart of Union Square…

When you’re in a big city like San Francisco, it’s unlikely that you’re going to be able to live in a little log cabin.  Or is it?  Well here’s a little log cabin that’s attached to the side of an urban infill building right smack in the heart of the city, as if it’s a magnet on a refrigerator.  Manifest Destiny, as it’s called, project by amazing co-designers Mark Reigelman and Jenny Chapman who aimed to create a unique masterpiece.  They had to contact about fifty different building owners and eventually struck a chord with Hotel des Arts, deciding on it to be the chosen one to receive this little house clinging to it.  The cabin itself is crafted out of reclaimed wood and is currently used as an art studio.  Be sure to check out the video on page 3!

If you are walking near Union Square in downtown San Francisco, make sure you look up as you make your way down the sidewalk. Several stories above ground, you’ll see a tiny wooden pioneer’s cabin clinging to the side of a ten-story hotel. On display until October, 2012, Manifest Destiny! is the product of a collaboration between two designers; San Francisco-based Jenny Chapman and New York-based Mark Reigelman. The team contacted over fifty building owners in downtown San Francisco seeking a site for their proposed project. Originally, they had hoped to install three different cabins, but eager to begin construction, decided to focus on the Hotel des Arts site. The Manifest Destiny! cabin is built from naturally aged wood, which was sourced from an Ohio barn built in 1890 by E&K Vintage Lumber in Los Angeles. The barn wood was used as-is and reclaimed to create the cabin’s authentic look. Inside the barn wood cladding, a modern aluminum frame provides the structural support neccessary to suspend the cabin to the side of the hotel several stories up. Since the design included lighting the cabin at night, but the building permit didn’t allow the piece to connect to the electrical grid, the artists decided to use solar panels. While the cabin is cute and photogenic, the concept behind it is difficult. While many viewers have interpreted the piece in different ways, the genesis of the project is a comment on history and the settling of California. 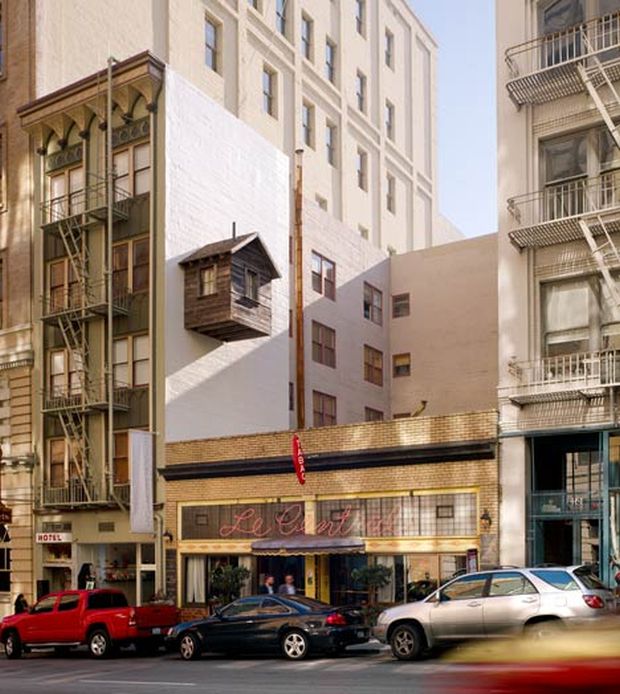 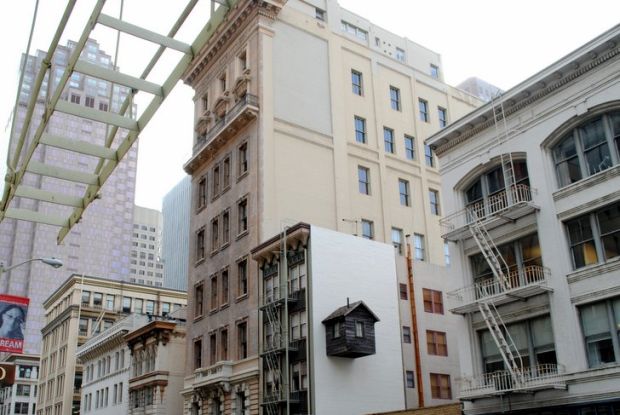 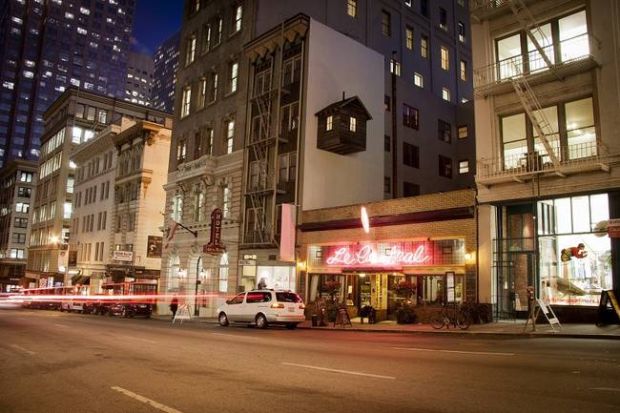 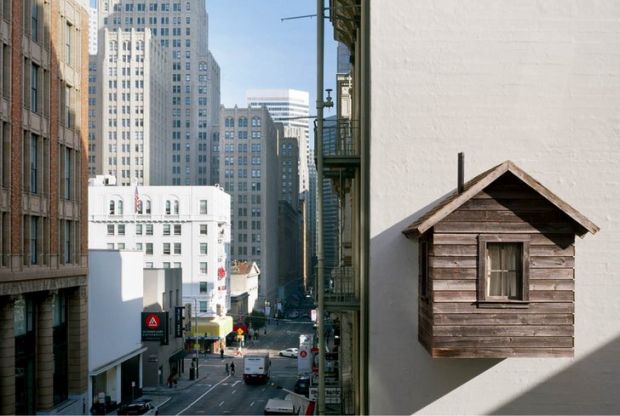