Artist Mark Reigelman created the temporary installation called “Reading Nest” in only 10 days using 10,000 old wooden boards and 40,000 nails holding the structure together (also reinforced with 200 meters of steel tension cable). The inspiration for this project came from a kingly mythical half-eagle half-lion creature called the Griffin, known for being witty and seeking out and guarding gold and treasure. 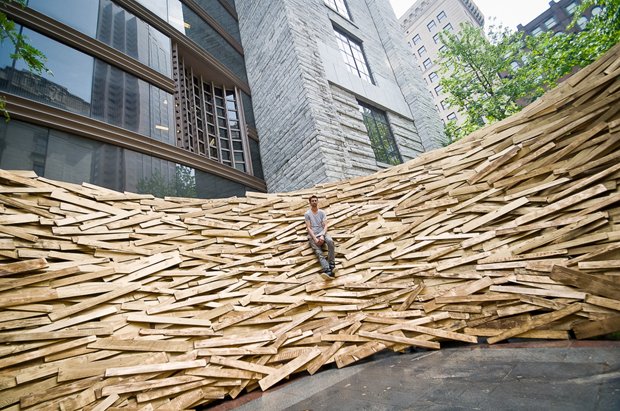 This structure has been installed outside the Cleveland Public Library, where Mark Reigelman acquired 10,000 rejected wooden boards from various sources including local industrial units…. He built this mythical themed structured, which… could also be used as a private library with bookshelves being built inside. 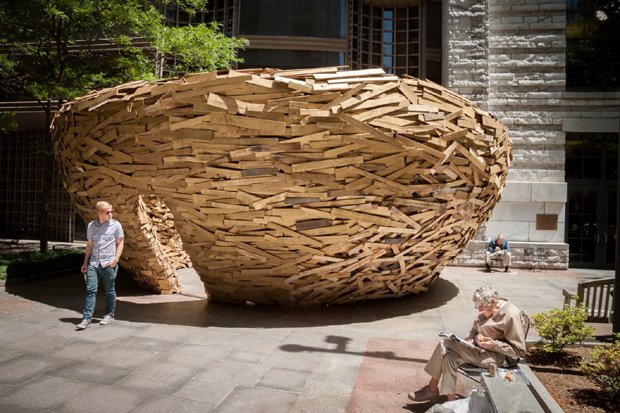 ….The concept behind the nest is quoted as, “For centuries objects in nature have been associated with knowledge and wisdom. Trees of enlightenment and scholarly owls have been particularly prominent in this history of mythological objects of knowledge. The Reading Nest is a visual intermediary between forest and fowl. It symbolizes growth, community and knowledge while continuing to embody mythical roots.”

The exterior of the Reading Nest is a combination of raw looking wooden boards, and some others which have been painted golden for a royal look. The internal part of the nest however, is fully painted with gold colored paint, to maintain the theme on which the structure has been put together.